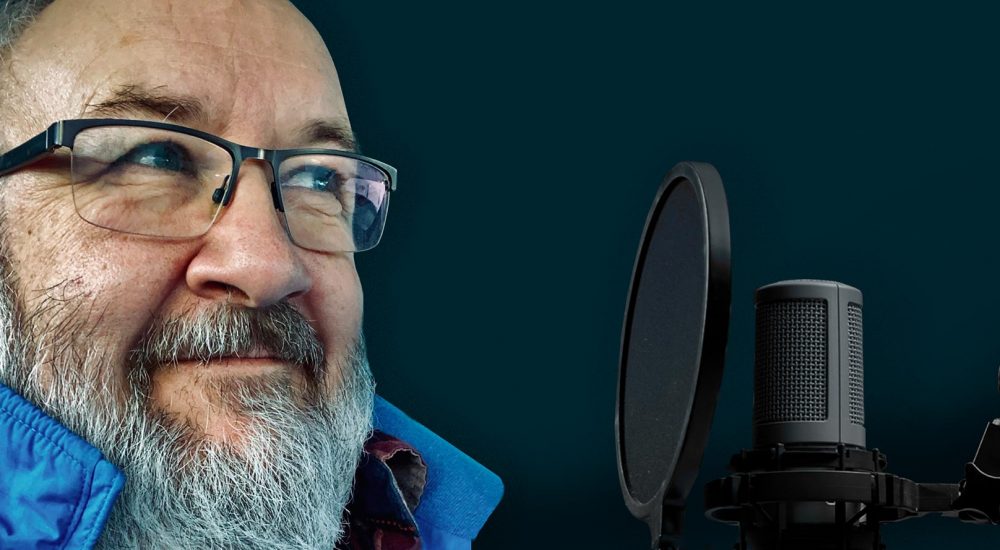 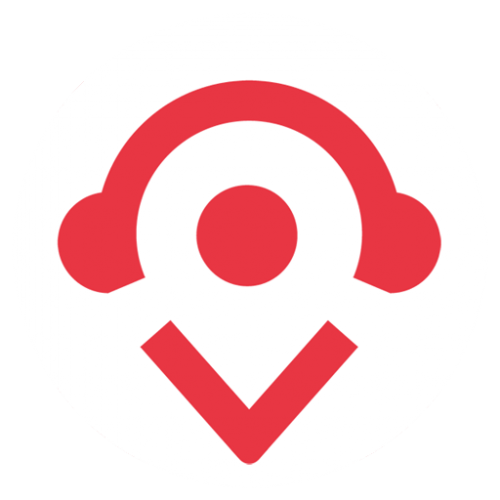 If you want to be heard, you must have a voice

- You have probably experienced it: Goosebumps that spread over your body when you hear beautiful music, the high pulse and terror when the music in a horror film reaches you, the pleasure you feel from a good narration in the audio book. Hearing helps to enrich our senses. Jon Henriksen is our narrator in the app Voice Of Norway and we have had a chat with him about his love for the language.

Apprentice to the best

– My big inspiration was Knut Borge and Torkjell Berulfsen, they were my bosses at Nitimen and Reiseradioen in NRK, says the former journalist Jon Henriksen. -Knut and Torkjell were artists of words and concerned with language and how they expressed themselves. They could build up the most beautiful sentences and bring more dimensions into the language. Enthusiasm for the language and how to express yourself I have taken with me further in my work as a narrator in the Voice Of Norway app, begins Jon Henriksen.

Our conversation has just begun. Jon sits in his studio in Ålesund, surrounded by instruments, and can say that his favorite instrument is drums and that he makes music and sound effects. I look at Jon via the PC screen and his voice slides pleasantly and calmly into my ears and easily draws me into the conversation.

The love of language

– I want to express myself in such a way that the audience will have a good experience. I can happily make sounds to reinforce the event in the story, as in the story of the puffins on Runde. Furthermore, I must have faith in what I read, live into it, allow myself to be both angry and moved when the text invites me to do so. If the text is deadly boring, I try to color it, although it could easily become a parody. It’s not entirely easy to revive a dead text, but you can have fun trying to revive it, he says with a big smile. As you can see, the love of language is more than just words and sentences, he explains in a gentle voice.

– When some languages have melodies and sounds that tell more than words, other languages are just harsh and without melody, Jon explains further. As a European, it is difficult to perceive mood in, for example, Arabic, Chinese and Japanese. But, that we have a rich language in Norway, I can perceive and play with that. I especially like how Nynorsk expresses poetry, emotions and drama, he explains and his voice sings elegantly as if to reinforce what he is saying. 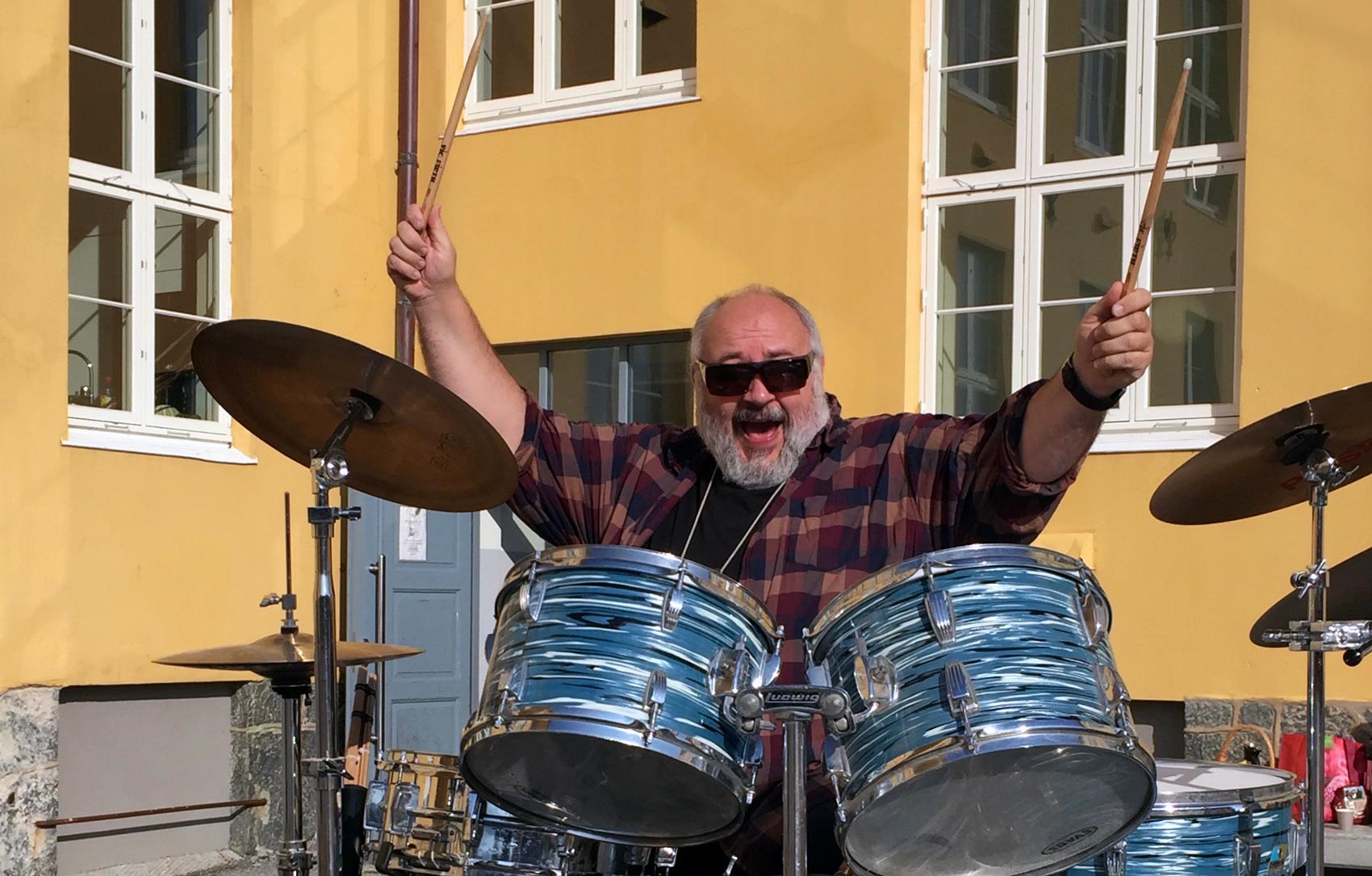 Jon grew up in Ålesund, but at home his parents spoke Eastern. Later he moved to Oslo and experienced that his “jolly voice” became Sunnmoorish while the serious side of him spoke Eastern. This changed over time and with a Sunnmoor accent he has now given good storytelling experiences to stories from the west.

Learning a lot about places in Norway

– It’s extra fun when I get additional information about stories that I already know about, says Jon.

–Peter Wessel* was a real seducer of women, according to the historians. He dealt with the wives of his fellow officers, so that his life was threatened and he had to flee, yes I did not know that, Jon laughs and brings out the warm humor in his voice.

– I am also well aware of the history of the cannon in Ålesund from earlier. But that it was so powerful that it broke the windowpanes in all the surrounding buildings when it was to be fired both towards the sea and the mountainside, well, I didn’t know that either, he chuckles. 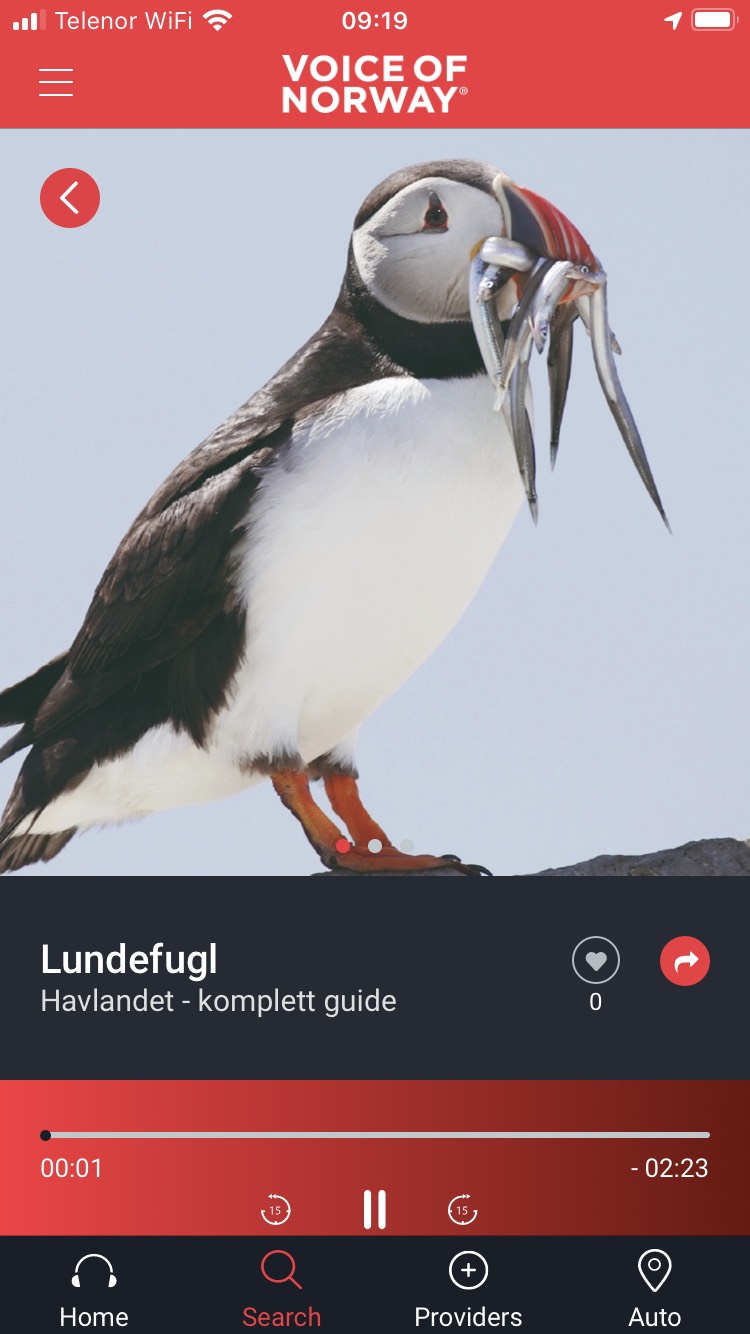 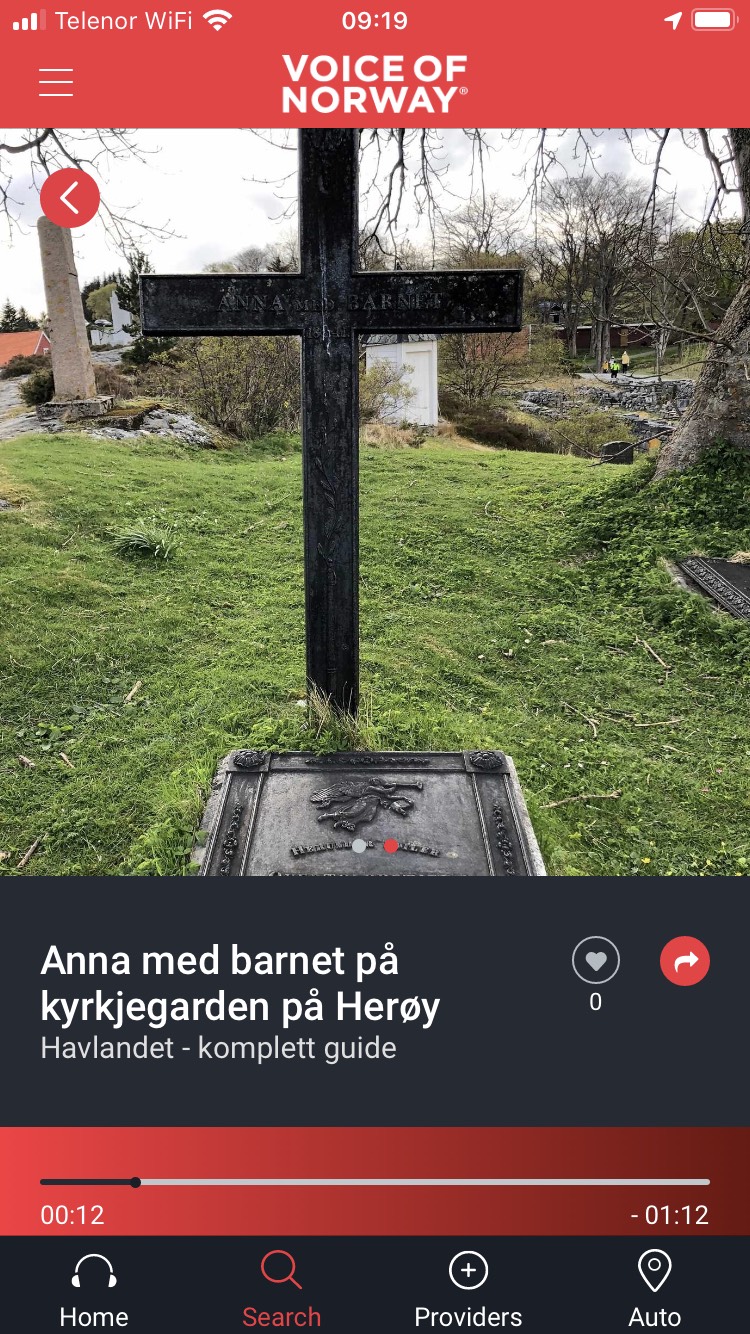 Click on the pictures and you can listen to the wonderful stories.

The customer receives a template of how the text should be created, and then I continue to work with the material I have received. The aim is to give listeners a feeling that they are left with a good experience when they are on tour.

The job in the studio: 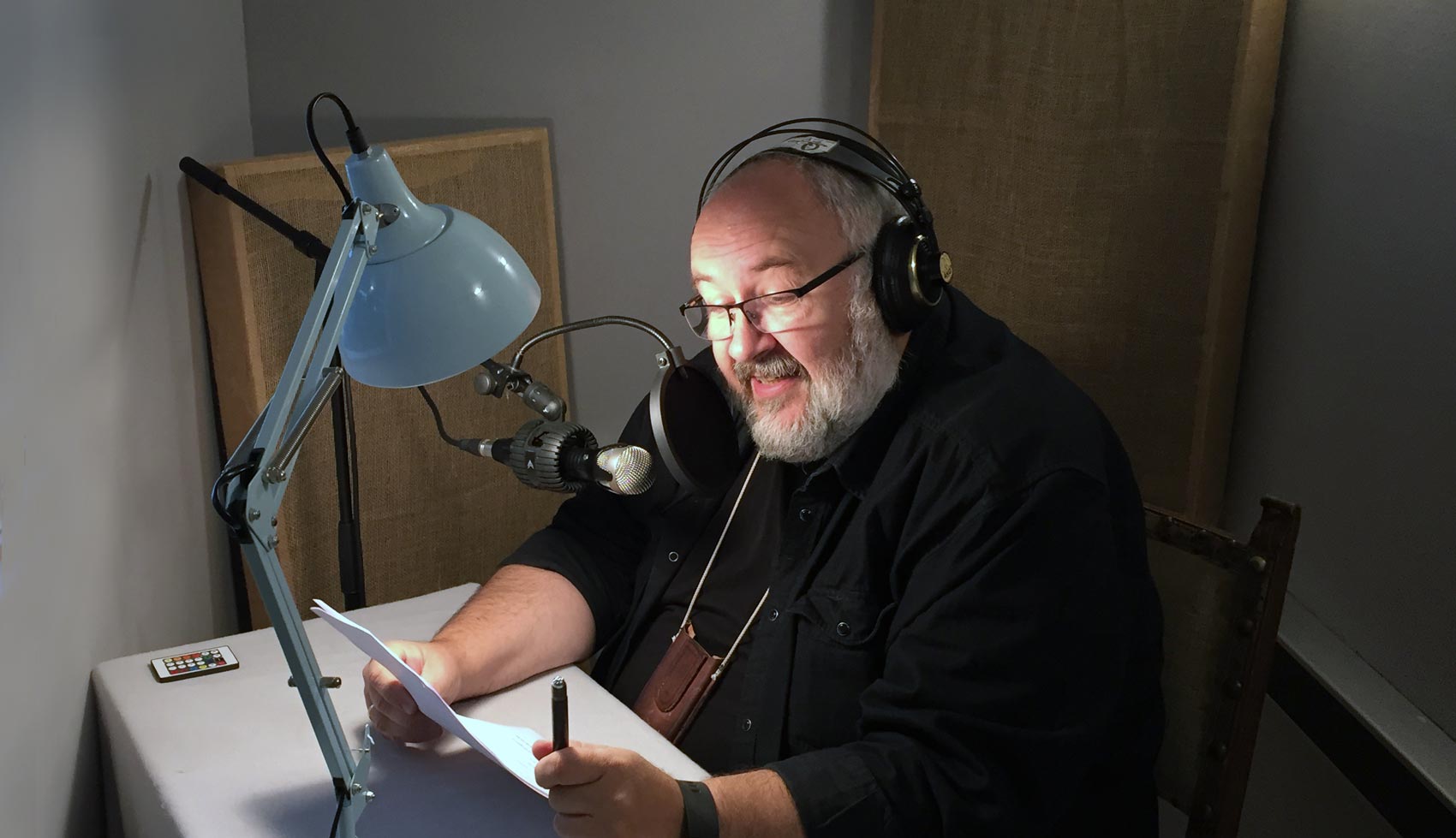 From the time at NRK, there were own technicians who took care of the technical aspects. Now I enjoy doing the whole process in my own studio.

Lived by the voice for many times - and the legacy continues

Jon now works with young people between the ages of 16-22 who voluntarily make an effort to get back to school or work. “Broen” is the name of the project and is part of Ålesund municipality’s offer to young people. – I am so proud of these young people and it makes me happy to hear them say: “Oh – I can certainly do something after all”.

Many people have enjoyed Jon’s pleasant voice. Those who went to football matches in recent years at Kråmyra and for a number of years at Colorline Stadium could hear that his son has inherited this voting glory. Many people thought it was Jon they heard as a speaker, but there football knowledge is equal to zero! Getting a red card here would be pretty dramatic!

6 tips
when you have to create good audio stories

In our “guide to audio guide” we go even deeper into the genre of audio stories and we elaborate on what is needed to create a good story that engages the listener during the trip. 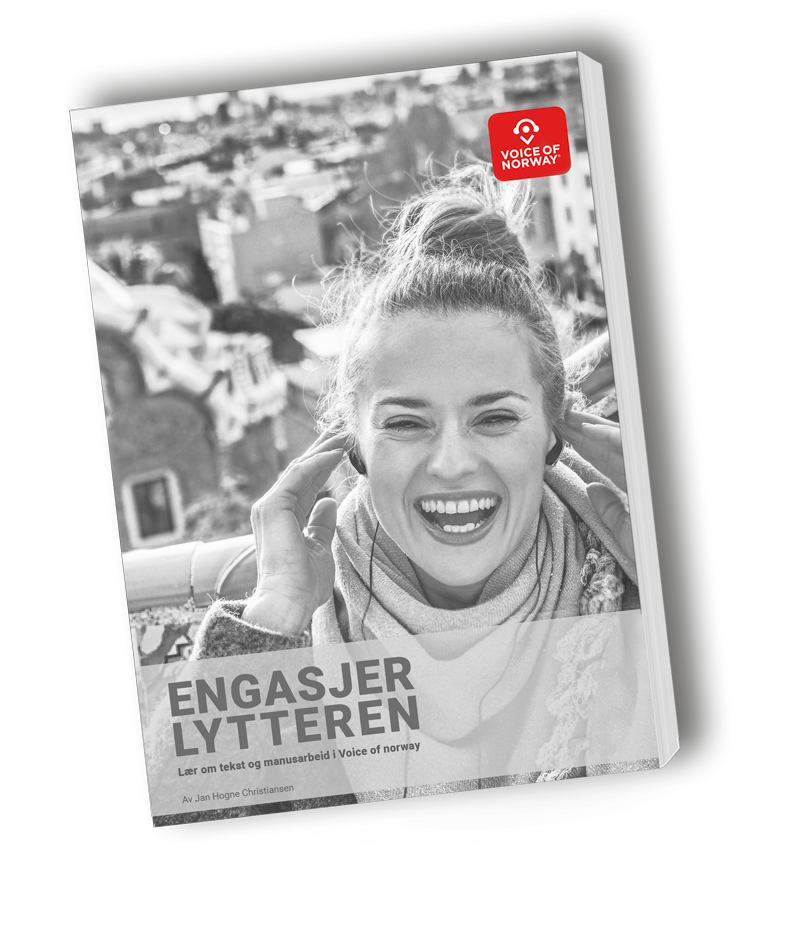 The Voice Of Norway app is used throughout Norway. Here’s how it becomes a joint service for everyone: to make the stories visible in their place – designed by yourselves.

PrevEldre innleggExperience Havlandet with the bird mountain Runde, the coast and fishing stories. The travel guide is an app on the mobile phone.
NextAkerselva – a unique outdoor museum – now with a guide via your mobileNext

Voice Of Norway is an app that audiovisually conveys art, culture, history and information. The content of the app is entered into publishing tools by our customers; municipalities, county municipalities, tourism operators, destination and passenger transport companies. The solution has been developed by the Norwegian-owned company Experio AS.